Imagine the excitement when you get a call from the Chairperson and you discover Millennium Kids features in Nat Amoore’s new book The Power of Positive Pranking. What do you do? Well, first you buy the book and second you contact the author and have a chat about why she featured MK in her book. More on that soon.

Now we have several copies of the book and we’d love to send a copy to a young reader who has an idea to change the world. Email your ideas to info@millenniumkids.com.au. All entries need to be emailed by 5.00pm Friday 5th March. The best entry, as judged by our Youth Board, will receive a copy of the book.

PS. Abby,  one of our fab young members, will review the book which we will feature in the next newsletter. 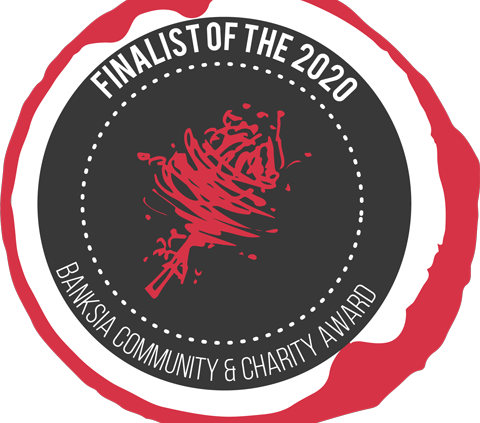 Congratulations to our amazing team past, present and future. Millennium Kids has been recognised as a Finalist of the Banksia Foundation Sustainability Awards 2020, in the Community category.

A huge thanks to Heather Johnstone for doing the hard yards to tell our story through the nomination process. And thanks to Isabella Poll and Catrina Luz Aniere for taking on the job of pitching our story to the judges. Representing the diverse range of projects and the young people who run them is no easy task.

Twenty five years of youth voice and action has shown us young people can step up to make change, can tackle the big issues, if their ideas are supported, mentored and valued by the people around them. And our members do not shy away from the big issues.

Thanks to our Youth Board and Council for steering this ship.

The Year 2 and 3 students at Falls Road Primary School have been very busy this term on a couple of initiatives inspired by the City of Kalamunda Adopt a Patch Program.

In first term the students had an opportunity to engage in the Trillion Trees education program. They were visited by Mr John Winter from Trillion Trees who spoke of the important role our native flora played in the everyday lives of our indigenous people. He also explained to the students that certain species were indigenous to certain areas and how it was important to know this prior to planting. The students then transferred seedlings to small pots in readiness for planting our Aboriginal Seasons garden.

In the first week of Term 4 Mr Winter and his assistant Anya McCarthy returned to the school to assist students to plant their plants in their seasons garden. The plants were placed according to the season that they produce fruit/food for the Aboriginal people as they made their way to and from the coast.

The students are creating permanent signs during their Art lessons to identify the seasons.

In week two of Term 4 the students engaged with Mrs Cathy Levett from Millennium Kids. The students enjoyed a nature walk through Fred Eversden Reserve (adjacent to the school) identifying native flora and discussing how the plants assisted the Noongar people of the area.  Cathy gave the students an opportunity to look at flowering plants close up, the favourite obviously being the Trigger Plant (Stylidium). They also discussed what local fauna may live in the reserve whilst listening to the abundant bird calls.  The students learnt about non indigenous plants and the negative impact these have on our environment.

We are super thrilled to announce Millennium Kids received the UNAAWA Environmental Award 2020 presented at the UN 75th Anniversary at the Duxton Hotel in October. MK Youth Board representatives Isabella, Amelia, Patrick and Niamh were excited to receive the award on behalf of the MK Crew.  It was a great to share the night with the team of Youth Board, Council, mentors and friends of MK. Celebrating 25 years of youth voice and action.

Now for another 25 years of youth led initiatives.

Teach for Australia representatives from the Goldfields joined the Kids on Country crew as part of their Nutha Way program on the first weekend of November 2020 . The Nutha Way program aims to build positive relationships in the community through youth led strategies for change. The kids from Coolgardie love going on country, learning about their culture and the history of the woodland, the largest intact temperate Mediterranean woodland left in the world. The team headed to Burra Rock Conservation Park for the day with a team from Teach for Australia. They went through an area that was burnt out earlier on in the year and commented on the new growth coming through.

The local dam provides a fabulous place for swimming on a hot day. The teachers and the kids climbed to the top of the rock and marvelled at the immense views taking in the surrounding Woodland.
A part of going on country is learning about their responsibility as custodians. At the dam they noted there where 4 x 4 vehicles that came out onto the rocks and up into the dam area. The kids want to protect the area for future generations so they report any vandalism or any interesting observations they make on the day to local authorities.
They had lunch, swiped away a million flies and then did a clean up of the area before leaving to take a short trip out to a special spot. The kids where keen their visitors saw a malleefowl nest so at the end of the day the bus took a detour to a large nest in a burnt out area. The kids will monitor the nest for any activity over the next few years as the bush in the area recovers.
As the bus returned to Coolgardie they watched the clouds came in with a storm they hoped would fill the Burra Rock dam with all important water.
Photo Courtesy: Tjudawarra Imagery – Brenden Ah Kim
November 5, 2020/0 Comments/by Catrina-Luz Aniere
https://www.millenniumkids.com.au/wp-content/uploads/2020/11/TrFrJkAg.jpeg 3325 5183 Catrina-Luz Aniere https://www.millenniumkids.com.au/wp-content/uploads/2018/06/Millennium-Kids-banner-logo.png Catrina-Luz Aniere2020-11-05 05:47:102020-11-05 05:50:58On Country with New Friends 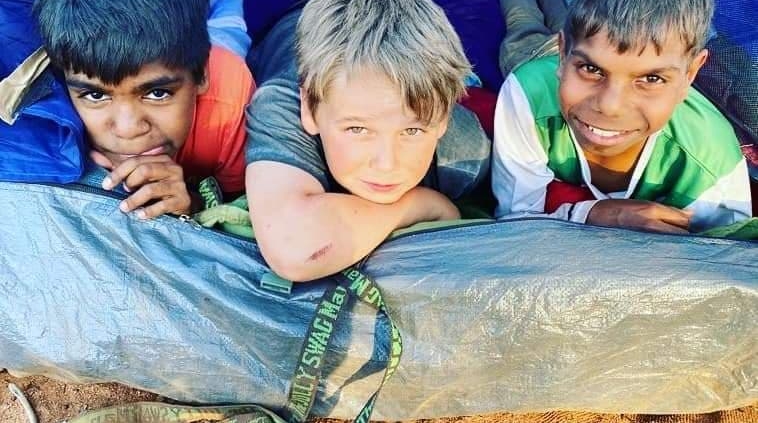 Our Nutha Way team got out on Country with Elders and kids from Coolgardie in September. The kids have been learning laws of the land, how to pack for a camp, taking water on country, the need to have a back up vehicle, WWCC’s for all people working on the program,  and proper licences for bus travel and a back up satellite phone.  They also talked about seat belt laws and the new fines for using your mobile phone when driving.

The older Youth Leadership Team members are stepping up and joined Cat the day before the program started, checked the camping gear and first aid kit, organised the list of food and did all the purchasing for the weekend. They also dropped the itinerary off at the Coolgardie Police Station and made sure all the parents had the flyer about the camp and signed permission forms before the day of departure.

Nanna Betty wanted to take the kids somewhere special so everyone headed to the bus and off we went. Our camp site was a Queen Victoria Rock and the kids all had torches and went up the rock at night and watched the stars. The next day the kids did a camp clean up and decided to write a letter to the Department of Biodiversity, Conservation and Attractions to tell them someone had vandalised the toilet door.

‘ I love going on  the bus. We get to go to places we havent been to before. I like hearing the stories Nanna Betty and Nanna Maxine tell us, ” said Tamara.

Gary Simpson, Police Officer in Charge at the Coolgardie Police Station, dropped in after the program to say hello to the tea. He was even seen at the local pool with his feet in the water, having a chat to local kids as part of the film being made by the kids to tell their story.

The Nutha Way program is a program of The Law Society, empowered by Millennium Kids Inc and Media on Mars and funded by Department of Justice Criminal Property Confiscation Grants Program and Lotterywest.

My mum and I went Malleefowl monitoring with the Malleefowl Preservation Group on the 3rd October , 2020 at Merriden. It was amazing because we saw 2 Malleefowl’s that were near their nest, they were screeching to try and scare us away from their nest. We saw 3 active mounds that were in use by Malleefowl’s we visited in total 15!!!!!!

On the  mounds I saw fox  scats ,Malleefowl eggshells and scratchings and the COOLESt mystery ant that had an abdomen like a bee. It also had a red head with black eyes and wings. We also found a trap door spider nest.

Have a great week, Phoenix. MK Youth Board Member

If you have a great nature story to tell please send your article and photo to info@millenniumkids.com.au

And a GREAT big thank you to our Donors.

A super big thank you to all our donors big and small. Your donations help us fund the programs and ideas developed by our young members.

Thanks a million to the crew from Sunburnt Films who have donated $5000 worth of their time to help us make a 90 sec film about our work. The Kids have decided to make a film about their Citizens Assembly 2021. With an additional donation from our good buddy John and Sheryl we are on our way to raising funds to make this youth led, deliberative democracy process happen in 2021. Watch this space.

Thanks a million to Denise, Joanne, Gill, Rena and Mary. Your donations are going towards a t- shirt for the Kids on Country crew so they can show off their art skills and look smart when they lead their on country tours.

A big thank you to Heather for doing her art fundraiser. Your donation will support a young person with a Green Lab pitch to protect, monitor and increase canopy in the Perth metropolitan area.

A million thanks to long term donor Josie. We have a new waste project in the pipeline and we look forward to sharing more news soon.

The Kids on Country team want to get their driver’s licenses so they can lead tours and share their knowledge with others. Lots of laws to learn. Lots of new skills on the agenda.

Lore/Law is brought to you through a Law Society of Western Australia collaboration with Millennium Kids Inc, Media on Mars, Periscope Pictures and Parna Media with funding from Department of Justice’s Criminal Confiscation Grants Program and Lotterywest.

Check out www.millenniumkids.com.au for the full story.

The Great Tin Can Bee Hunt

Going on a bee hunt,

Gonna get a big one,

Our Kids on Country crew want to be tour guides, to share the stories of their beautiful country in the Great Western Woodland.

Last weekend the team visited Karlkurla Park, in Kalgoorlie, Western Australia, and went on a bee hunt, learning about native bees as they took a walk through the beautiful park.

The team of Kids looked for recycled tin can bee art around the park and checked out the clues to learn about the different types of bees found in Australia.

“Did you know Australia has over 1700 species of native bees and the majority are solitary, meaning that unlike the introduced European Honey Bee, our bees don’t form swarms or hives.”

Thanks KBULG – we had fun with your bee activity. We found 11 and for every clue our team where rewarded with chocolate.

FUN FACT: The Ngadju word for honey is jarun.

BIG QUESTION: Do any of the native bees in the Great Western Woodland produce honey?

Send your answer to info@millenniumkids.com.au for some chocolate fun.

Care for the Environment.